Who is Neil Gorsuch?

Who is Neil Gorsuch? 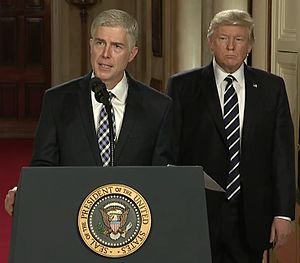 On February 1, 2017, Donald Trump nominated Judge Neil Gorsuch to be an Associate Justice of the Supreme Court of the United States to fill the vacancy left by the late Justice Antonin Scalia who died in February 2016.  Article 2, Section 2 of the United States Constitution requires that all presidential appointments to the Supreme Court be on the advice and consent of the Senate.  On March 20, 2017, the Senate Judiciary Committee held its first hearings on Gorsuch’s nomination.

Senate Democrats have vowed to block Gorsuch’s nomination in retaliation for Senate Republicans’ refusal to even consider Merrick Garland, the nominee President Obama named last spring to fill this same vacancy. Senate Democrats may be justifiably angry over this refusal given that it is the longest Supreme Court vacancy since before the Civil War, but it is doubtful that they will be able to justify a lengthy delay in holding a vote on Gorsuch.

So, who is Neil Gorsuch?  What does he value?  What impact would he likely have on an already divided Supreme Court?  What kind of replacement would he be for Scalia, who was one of the most outspoken Justices in recent history?

Gorsuch has been a federal judge for the Tenth Circuit Court of Appeals since being nominated by President George W. Bush in 2006.  Prior to that he was a lawyer in private practice.  He also served as a clerk for two Supreme Court justices, current Justice Anthony Kennedy and former Justice Byron White.  During his time on the bench, Gorsuch has participated in several notable judicial decisions on a variety of topics.  Below is a sample of those decisions.

There was much talk during the presidential campaign about money in politics and the U.S. Supreme Court’s 2010 decision in Citizens United v. FEC, which essentially allows unlimited money to be spent by individuals and corporations to advocate for their political positions and candidates so long as they do not directly coordinate with a particular candidate’s campaign.  Gorsuch, as a Supreme Court justice, would likely uphold this decision, as he has, in the past, cited to Buckley v. Valeo in support of his prior decisions on campaign finance.  Buckley was the first Supreme Court decision that equated money to speech and, therefore, protected the spending of unlimited amounts of money on political advocacy under the First Amendment’s Freedom of Speech protections.

Gorsuch’s decisions use a broad definition of religious freedom.  Prior to being reviewed by the Supreme Court, the Tenth Circuit heard arguments in Hobby Lobby Stores v. Sebelius, which centered around the mandate in the Affordable Care Act (aka Obamacare) that employer-based health insurance group plans must provide coverage for contraceptives, namely the birth control pill.  Gorsuch agreed with the majority of the Tenth Circuit, and ultimately the Supreme Court, that the contraceptive mandate violated the Religious Freedom Restoration Act by requiring a private business to do something against its religious beliefs.  Gorsuch also joined in a dissent in Pleasant Grove City v. Summum, which opined that a government’s display of a donated monument of the Ten Commandments did not obligate the government to display other offered monuments representing other religions.  The Supreme Court held the same opinion as Gorsuch and reversed.

Although this particular topic is not the sexiest of all legal topics, many on both sides see it is as crucially important to the balance and separation of power between the three branches of government.  Currently, all federal administrative agencies have the power to write their own regulations pursuant to Acts of Congress granting them that authority (pursuant to due process requirements of public notice and comment periods). As such, for over thirty years, the Supreme Court has required that the courts defer to these agencies in interpreting ambiguous laws and regulations. See, for example, Chevron USA v. National Resource Defense Council, Inc. On the one hand, it makes sense, given that these agencies are the ones that are charged with executing these laws and regulations on a daily basis – thus the agencies have knowledge of the practical implications of the regulations as well as an understanding of what the agency intended in writing the regulations.

On the other hand, it essentially takes the power of judicial review away from the courts and allows the administrative agency to serve as all three branches of government by writing the regulations (legislative), executing the rules (executive), and interpreting those rules (judicial).  Gorsuch believes that the Chevron doctrine of giving deference to the agencies’ interpretation is an abdication of the judiciary’s authority and not in line with the Framers’ original constitutional design.  Overturning Chevron could have a profound impact on the strength of federal administrative agencies and shift more power away from the executive branch and to the courts or to Congress.

We have saved the most passionate court issue for last – the issue of a woman’s right to choose to terminate a pregnancy.  Unfortunately, Gorsuch has not authored any judicial opinions on this topic.  The closest was his dissent in the denial of an en banc hearing in Planned Parenthood v. Herbert whereby a split panel of Tenth Circuit judges ordered the Utah Governor to resume funding to Planned Parenthood after he had previously blocked its funding.  Other than that lone dissent there is not much to go on.  However, Justice White, for whom Gorsuch clerked, dissented in Roe v. Wade.  And Justice Kennedy, for whom Gorsuch also clerked, while expressing his support for Roe v. Wade, has significantly chipped away at the right to choose by, for instance, upholding a federal law criminalizing late-term abortions.  Thus, it is likely that Gorsuch is likely to advocate for narrowing the right to choose if not outright support the repeal of Roe v. Wade.

This is where Gorsuch stands on the issues of the day.  Whether you agree or disagree, get involved.  Contact Senator Tammy Baldwin here and/or Senator Ron Johnson here (or your Senator if you are not from Wisconsin) to register your opinion on Gorsuch today.