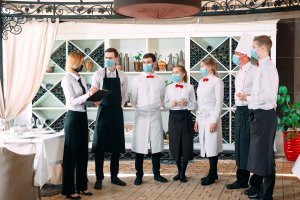 The U.S. Department of Labor recently proposed further rulemaking for tip regulations, which delayed some regulations until December 2021, while others took effect on April 30, 2021.  The FLSA allows an employer to count a limited amount of tips received by its tipped employees as a credit toward the employer’s Federal minimum wage obligations. This is called a tip credit, and employers may only claim it if their tipped employees retain all the tips they receive. Employers may however implement traditional tip pools, where tips are shared between all employees who regularly and customarily receive tips. In 2020, the Department of Labor issued the “Tip Regulations Under the Fair Labor Standards Act” (2020 Final Tip Rule), which clarified and created stricter regulations on tip credits and tip pools. These include prohibitions on employers keeping tips, increased record keeping requirements, and allowances for non-traditional tip pool structures.

Much of the 2020 Final Tip Rule took effect on April 30, 2021, and employers need to be prepared for the changes that accompany it. The main changes include:

What do the NPRMs delay?

The first NPRM will delay the effective date of three provisions under the 2020 Final Tip Rule until December 31, 2021, to give the Department time to complete more rulemaking. Two of the three provisions are civil monetary penalty provisions (CMPs), and the third is a provision of the rule that addresses the applicability of the FLSA tip credit to tipped employees who perform both tipped and non-tipped duties. This provision may be reproposed in the coming months.

The second NPRM will withdraw and repropose the civil monetary penalty provisions under the FLSA tip regulations. These provisions establish monetary penalties for violations of the tip regulations. This NPRM seeks to modify the language of the CMP provision to better describe “willful” violations. The new provision will clearly state that an employer’s receipt of advice from WHD that its conduct is unlawful, and its failure to inquire further about the legality of its conduct, are not the only relevant facts that can help make the determination, among other considerations. Ultimately, the Department, and the courts, will account for all of the facts and circumstances surrounding a violation, to determine if it was willful.

How does this affect employers?

The biggest takeaway from this is that as of April 30, 2021, FLSA fully prohibits any employer from keeping tips received by workers, regardless of their use of tip credits. If an employer keeps these tips, they will be subject to civil monetary penalties, up to $1,100 for each violation, if willful. The Department will be modifying the language to better describe that all the facts and circumstances surrounding violations will be taken into account, including but not limited to interactions with the Department.

The new rules allow employers to implement mandatory “non-traditional” tip pools. This means that employers can now create mandatory tip pool systems that include non-tipped workers such as dishwashers, or cooks. However, employers may only do this if they do not take a tip-credit. Furthermore, an employer may not withhold from the salary of a non-tipped worker if they do receive tips from such a sharing scheme. Finally, December may bring further clarification on whether employees who perform both tipped, and non-tipped work are covered by the FLSA tip credit. For now, the department does not know what direction it will take, but be aware of any potential changes late in the year.

If you have any questions about the impact of the 2020 Final Tip Rule, or your legal obligations as an employer, contact Kramer, Elkins & Watt, LLC.