How Badly Does My Employee Have to Mess Up to be Denied UI Benefits?

How Badly Does My Employee Have to Mess Up to be Denied UI Benefits? 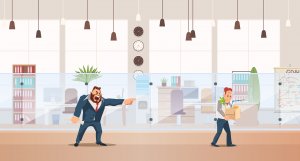 An employee messed up.  You need to fire him or her.  Will he or she receive unemployment insurance (“UI” also sometimes referred to as unemployment compensation) benefits?  Well, the UI division, and the courts, look at just how bad the conduct was.  In a recent decision, the Wisconsin Court of Appeals provides employers with additional guidance on what type of conduct is bad enough to justify a denial of UI benefits.  (If you like reading court decisions, you can find the Court of Appeals’ full decision in Easterling v. LIRC here.)

The standard for decades was “misconduct.”  If an employee was terminated for misconduct connected to employment, the employee was ineligible to receive UI benefits.  If the conduct did not rise to the level of misconduct, benefits were, generally speaking, allowed.  Then, the law changed in 2013.  Misconduct remains relevant.  However, since 2013, an employee can be found ineligible for UI benefits for conduct that involves the “substantial fault” of the employee, despite whether that conduct amounts to misconduct.

Is there Substantial Fault?

The issue in the Easterling case focused on the definition of an inadvertent error that does not amount to substantial fault under the statute.  In that case the employee, who was employed as a driver for a transportation service, failed to properly secure a passenger’s wheelchair before transport, resulting in the wheelchair tipping over.  The employer had a clear policy requiring that driver secure wheelchairs.  The employee violated the policy, and was consequently terminated.

The court found that the employee’s error, in failing to secure the wheelchair, was inadvertent.  Why?  The circumstances matter, the court said.  Not every failure to follow an employer’s policy would be inadvertent error.  In fact, not every failure to properly secure a wheelchair would be inadvertent error.  In this case, however, there were several facts that led the court to find the employee’s error was inadvertent.  First, the employee usually had an experienced volunteer along to assist passengers, but did not that day.  Second, the employee was trying to secure three other passengers at the same time.  Third, the employee was rushing because she was parked in a busy crosswalk.  Finally, she completed the first two steps of securing the wheelchair – she positioned the wheelchair properly and applied the brakes – but she forgot to complete the final step of securing the floor straps.  As a result of these circumstances, her error was found to be inadvertent.  Thus, she was allowed UI benefits.

What should employers know about termination and unemployment benefits?

What does this mean for employers?  It drives home the message that each situation is unique.  Each termination must be viewed on a case-by-case basis to determine whether the employee will likely be entitled to UI benefits. The bottom line: violation of a clear policy of the employer does not automatically mean an employee would be ineligible for UI benefits.

So why should an employer care whether a terminated employee is eligible for UI or not?  Because UI claims directly impacts the UI tax rate each employer pays.  Thus, knowing whether an employee  is or is not eligible for UI benefits is helpful in lowering the employer’s UI tax rate.  Knowing  these potential costs should inform an employer’s decision-making and planning in three respects: (1) whether to fire an employee in the first place, as opposed to just disciplining the employee; (2) whether to fight a claim for UI benefits, or to appeal an initial determination allowing benefits; and (3) how to write, revise, and enforce policies to minimize room for inadvertent errors.

This area of the law is evolving.  Another case is currently pending before the Wisconsin Supreme Court (you can read the Court of Appeals decision in that case, Operton v. LIRC, here), wherein a key issue is whether a series of failures constituted substantial fault.  Stay tuned for developments.

Since the original posting of this blog, the Wisconsin Supreme Court has decided the case, Operton v. Labor and Industry Review Commission (LIRC) which was mentioned in the original blog article with promises for the update. We know you’ve been on the edge of your seat.

In that case, the Supreme Court reviewed LIRC’s denial of Operton’s request for unemployment benefits. LIRC found that Operton was ineligible for benefits because her actions constituted substantial fault. The Wisconsin Supreme Court reversed. Let’s take a look at what happened.

Operton held the position of full-time service clerk for Walgreens over a period of 20 months. In this role, she completed roughly 80,000 cash transactions.  Operton made a few errors in completing customer transactions including accepting a check for the wrong amount, accepting a check without a customer’s signature, accepting a post-dated check, failing to instruct a customer to complete a transaction on a pin pad, and failing to ask a customer using a credit card for identification where the credit card ended up being stolen. Each of these errors cost Walgreens money, ranging from seventeen cents to close to $400 for the failure to ask for identification. Each time, Operton received a warning from Walgreens. She was eventually terminated after the failure to ask for identification.

Operton applied for unemployment insurance benefits, which Walgreens contested and stated Operton was terminated for cash handling errors and failure to improve. Walgreens never alleged that any of Operton’s errors were intentional.

The question before the Wisconsin Supreme Court is whether the actions of Operton should lead to her denial of unemployment insurance benefits. If her conduct amounted to either misconduct or substantial fault, she should be denied benefits. Substantial fault is defined in Section 108.04(5g) of the Wisconsin Statutes to include the following: “acts or omissions of an employee over which the employee exercised reasonable control and which violate reasonable requirements of the employee’s employer.” Examples provided by the legislature make clear that inadvertent errors made by the employee do not rise to the level of substantial fault.

Narrowing the issue, a bit, the Wisconsin Supreme Court was to determine whether the errors by Operton would be considered “inadvertent.”

The Court determined that the errors by Operton were inadvertent, and therefore she should be eligible for benefits.

In reaching this conclusion, the Court reasoned that there is no evidence that Operton intentionally or willfully disregarded Walgreens interests. Also, that Operton’s errors were not so careless that they suggested wrongful intent. Also, although related, the errors were slightly different. Furthermore, the Court compared the number of errors – eight – to the total number of transactions handled by Operton – over 80,000 – to conclude the number of errors was small in comparison to the total number of transactions completed.

A series of unintentional errors by an employee is likely not going to be enough to deny unemployment insurance.

If you would like to discuss this area of the law further or how you can minimize UI liability for your business, contact Attorneys Jessica Kramer, Leslie Elkins, or Nick Watt at KEW.

Please sign up to get updates from Kramer, Elkins & Watt here.