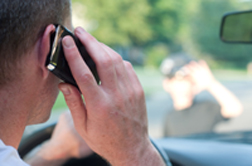 Now, though, texting isn’t the only thing prohibited while driving.  As of October 1, 2016, if you’re in a construction zone, using your mobile phone, even for talking, is punishable by a fine, with the passage of 2015 Wisconsin Act 308.  Fines range from $20 to $100.  Construction zones include areas where people are engaged in highway maintenance or construction, as well as where workers are performing utility work and the area is at risk from traffic.  In other words, watch not only for orange barrels and signs, but also for workers, and it’s a safe bet to get off that phone if you see them on or close to the road.

There are some exceptions under this new law.  For instance, if your car has voice-operated or hands-free communication system—like Bluetooth—you can still use it.  (Never fear, you can still have your weekly hour-long chat with your mom while on that awful stretch between Madison and Milwaukee that is often riddled with construction.)  And of course if there’s an emergency on the road don’t hesitate to call 911 just because you’re in a construction zone.

Obviously, though, these exceptions are narrow.  So if you find yourself in a construction zone, be sure not to make any calls, and if you’re already on the phone be sure to either set it down, or inform the other person that you’ll have to call them back.