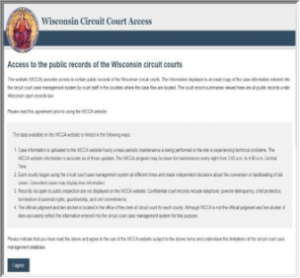 Good news for people with dismissed criminal cases, evictions showing up on CCAP

You’ve probably used the Wisconsin Circuit Court Access (“WCCA”) website, which displays information on cases in state (circuit) courts in all of Wisconsin’s 72 counties, called the Consolidated Case Automation Program (“CCAP” – pronounced “see-cap”).  You’ve also probably heard someone complain, or complained yourself, that a case that was filed a long time ago and which was later dismissed, either because you won or the matter was resolved, still shows up on CCAP, tainting your reputation.  Fear not, the WCCA Oversight Committee (made up of judge, county clerks of court, law enforcement, attorneys, legislators, and a few others) is coming to the rescue and has recommended that certain criminal and small claims cases be removed from CCAP.

More specifically, criminal misdemeanor and felony cases that were either dismissed or in which the defendant was acquitted following a trial will be removed from public view on CCAP two years after the date of the dismissal or acquittal.  This applies only to cases in which the entire case – or all charges brought under one case number – were disposed of by dismissal or acquittal.  Plea deals resulting in a conviction will still show up.  If a criminal defendant is convicted of one charge in a case but other charges in the case were dismissed, as is common in plea deals, the entire case, including the dismissed charges will still appear.  However, dismissals that result from deferred prosecution agreements (often called “first offender’s program”) will be removed two years after the dismissal.

Likewise, small claims cases that have been dismissed will be removed two years after the dismissal.  This includes evictions that were dismissed because they settled or the defendants won at trial, injunction petitions relating to abuse and harassment (also called restraining orders) that were dismissed or denied, and claims for money (that were filed in small claims because they were under a certain dollar amount, which varies by type of claim and the date the case was filed).

Have the cases permanently disappeared?

Now, this doesn’t mean that those cases have been sealed, destroyed, or otherwise no longer exist.  A person with a case number could still go to the courthouse of the county in which the case was filed and ask to see the court’s public file on the case.  Most cases are, by law, a matter of public record, with a few exceptions like juvenile matters, and that is not changing.  What is changing is that the ease with which anyone with an internet connection can view these certain types of dismissed old cases, or pull them up in a search that takes three seconds, is being taken away.

We will also see a change in what information is displayed when a user clicks to open a criminal case on CCAP.  It is not uncommon in criminal cases for the original charges to be modified.  Sometimes these modifications are to a lesser charge.  Currently, only the original charges display on the first page which provides a summary of the case.  A user must click on “view history and details of charges/sentences” to see whether the charge was modified to a different charge, read in but dismissed, or changed in some other way before final disposition.  Under the recommended changes to be implemented, charge modifications will be displayed on the summary page and will be more clearly displayed, in an effort to reduce confusion about what charge was actually taken to disposition (conviction, acquittal, plea, or dismissal).

All of these changes will result, the WCCA Oversight Committee hopes, in a reduction in discrimination against and stigmatization of people who were never convicted or evicted, or against whom a judgment was not entered in a small claims case.  The modest changes are seen as striking a balance between the public’s right to know information and a person’s right to privacy and discrimination.  At KEW, we’ve heard many stories about businesses who use CCAP as their “background check” tool. We cautioned against it in an article originally written in 2016:  Think Twice Before Using CCAP can be found on KEWTips.

When will we see these changes?

As early as April of this year, cases falling in the affected categories that are more than two years old will start being removed from view through CCAP.

Information regarding CCAP can be found on the FAQ Page, available by clicking here. https://wcca.wicourts.gov/faq.html