A glimpse at immigration

A glimpse at immigration 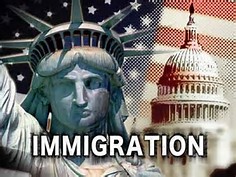 With all the news of President Trump’s immigration ban and tales of raids on non-citizens, we thought it might be helpful to go over some immigration basics.

Let’s start with a few definitions for terms that have been floating around the internet recently:

Citizen: An individual born on U.S. soil, born outside of the U.S. to citizen parents or in some cases grandparents, or naturalized. Anyone who is not a citizen is considered a non-citizen.

Admission. The process of permitting someone to be physically and legally in the U.S. Admission is part of the inspection process. A person may be inspected and admitted or paroled into the U.S. or, instead of being admitted, placed in removal proceedings or removed through expedited removal. Once a person is admitted, a number of legal rights and protections attach.

Inspection. The process that all people must go through when they arrive at the border. A person is questioned and asked to present proof of his or her right to enter the U.S. At the end of the process of inspection, a person is either admitted, removed, or paroled into the country.

Deportation. The removal, ejectment, or transfer of a person from a country because his or her presence is deemed inconsistent with the public welfare. (See also Removal)

Lawful Permanent Resident (LPR). A person afforded the benefit of being able to reside in the U.S. on a permanent basis. Also called “legal permanent resident” or “green card holder.”

Green Card. An expression that refers to the document carried by an LPR, which provides proof of his or her immigration status. The card is no longer green.

Naturalization. The administrative process by which an LPR is conferred citizenship.

Removal. The process used to eject people who are seeking admission as well as those who have been admitted to the U.S. Prior to the enactment of Illegal Immigration Reform and Immigrant Responsibility Act (IIRAIRA) in 1996, the terms “deportation” and “exclusion” were used.

Visa. An official endorsement, obtained from an overseas U.S. consul, certifying that the holder has been examined and is permitted to seek admission to the U.S. at a designated port of entry. There are both immigrant visas and nonimmigrant visas.

Deferred Action for Childhood Arrivals (DACA). A special form of deferred action created by the Obama Administration in 2012 to allow certain persons who had come to the U.S. as children to apply for and receive deferred action consideration.

What are some of the key differences between a Lawful Permanent Resident and a Citizen?

Immigration law is the body of federal laws, regulations, and policies that regulate the flow of people coming to the U.S.  It is complex and ever-changing because immigration laws are intertwined with local events, current national sentiments, and global catastrophes (war, poverty, natural disaster, genocide). U.S. immigration law has always been based upon several core principles: reunifying families (Family-Based Immigration), bringing in workers with special skills to fill gaps in the labor force (Employment-Based Immigration), protecting refugees and other vulnerable populations, promoting diversity (Diversity Visa Program) and providing humanitarian relief (Temporary Protected Status). Beginning in the 1990s, changes to immigration law began to reflect an additional objective which we are seeing unfold daily and that is fighting terrorism.

This blog was created with the help of Immigration Attorney Carmel A. Capati from Aperion Law Group. Next week, Attorney Capati will be writing an immigration blog focusing on visas, so if immigration issues interest you, be sure to check out KEW Tips next week.